I’ve been working with the Raspberry Pi Pico core before the new firmware update, I made by myself the integration of the PDM mic before it was released, and it was working very well for me, uploading audio to Edge Impulse through the CLI and deploying the model back in normal mode, it was missing just continuous mode.

The important thing:
With the new firmware, the upload time of audio to Edge Impulse got slowed down twice, with my firmware uploading 5 seconds of (16khz) audio took 10 seconds, now takes 20 seconds.

I was trying to play with the baud rate but the RP core doesn’t improve the transfer speed even using 921600 bauds, it’s something that you may know. I don’t know what you’ve changed that makes things slower.

This is with the new firmware:

This is with my firmware (a modification of the older RP firmware that includes PDM). 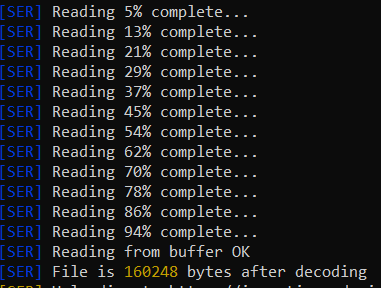 Also, the continuous mode is very slow (I know it depends on the model), but compared to the ESP32 (I know it’s faster) but umm. Please give it a check.

Thanks for the report! I will file an issue with the dev team.