Edge-Impulse-Run-Impulse stuck at sampling... in CMD

I have tried to follow the continuous-motion-recognition walk through to build an impulse to be deploy on Arduino 33 Nano Sense.

In this tutorial, you'll use machine learning to build a gesture recognition system that runs on a microcontroller. This is a hard task to solve using rule based programming, as people don't perform gestures in the exact same way every time. But...

While it can run but it stuck at sampling… at the 2nd iteration.
Please advise.

A few thoughts and questions for you:

How many times have you tried to run the impulse via edge-impulse-run-impulse after flashing and resetting your device? Does it always get stuck on specifically the second iteration?

Have you tried a different USB port / cable from your Nano to your computer?

Hi @jenny Thank you for your reply.

I have since shutdown my pc. As of just now I tried to open up the terminal and run the edge-impulse-run-impulse and the result is as follows: 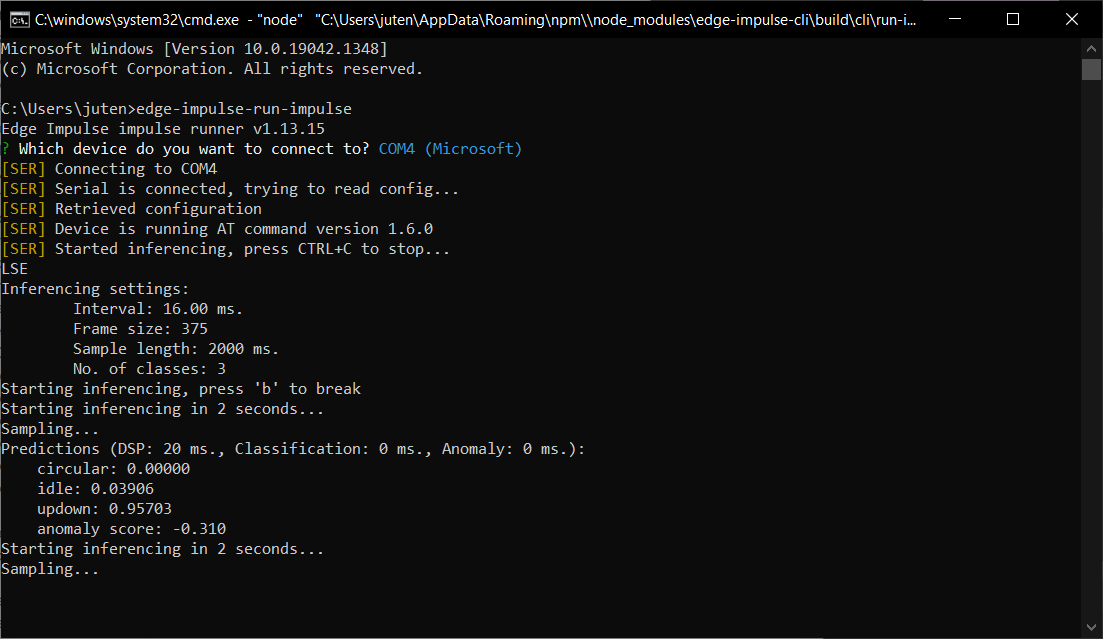 Meanwhile, I did not open the dashboard from edgeimpulse website via browser.

Does it always get stuck on specifically the second iteration?
Not always, sometime it stuck on the first “sampling…” iteration

Question: Do i need to close the dashboard in the web browser before i run “edge-impulse-run-impulse” in the terminal

Have you tried a different USB port / cable from your Nano to your computer?
I have tried a different cable, there is once it run 5 times before it stops at “sampling…” again
I tried to unplugged and connect back the device from the computer, close and relaunch the terminal and run the “edge-impulse-run-impulse” command. It stuck at the 2nd iteration of “sampling…”
all these while, only one terminal is active/opened