When testing the model on this wav file it also shows the “wav header” under the “Raw features”.
I would not expect the 44 byte wav header being part of the raw features (you can see that the first 22 raw features are very similar for most audio fragments). 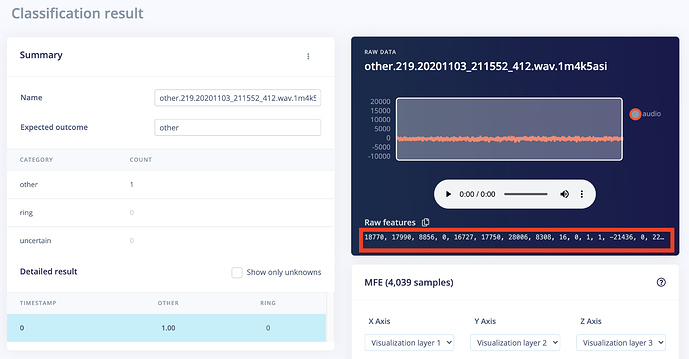 Note also that the uploaded wav file gives a different classification result compared to classifying it based on a WebAssembly deployment. (FYI using WebAssembly I got for the “other” category 0.219 instead of 1.000 for the same audio fragment).

Note that I have uploaded the audio file using :

and I have used CBOR (https://docs.edgeimpulse.com/reference#ingestion-api)

I think that the problem is that I have included the wav header in the binary payload while this is not expected.

Update : it is indeed the case that you should not send the wav header - only the raw audio data should be send. When I only put the raw audio in CBOR (without wav header) then it is working as expected.

@janvda, correct. We expect the PCM waveform for values, and the rest of the interesting info (channels / frequency) is part of the CBOR/JSON structure.